Hundreds of thousands of sardines were found dead in Sakhalin in Russia on the coast of the Strait of Tartary in early October.

Experts say strong temperature fluctuations in the water were to blame for the mass death of the Far Eastern Sardines. The sharp fall in temperature at night caused the fish to become inactive, and end up being swept ashore.

The sardines travel a long way from subtropical waters in early summer to Sakhalin for fattening here till mid-October each year, and rarely have they experienced such an extreme temperature change.

However, for locals, this was an opportunity for a free lunch, and literally so, with many of them coming to the beach with buckets to carry the fish home. Experts say the fish are edible. 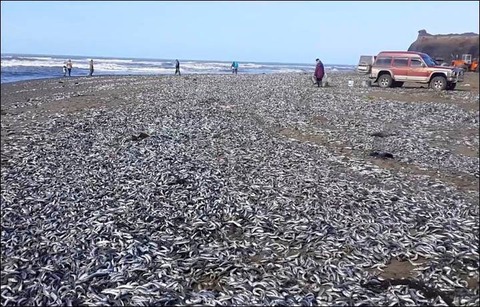